Claudine Barretto, Raymart Santiago say they have not separated 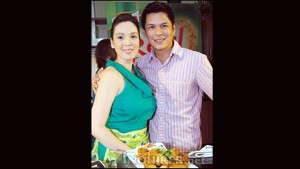 MANILA, Philippines – The telenovela-like scene captured by a TV news crew showing  actress Claudine Barretto fuming and crying inside a bank has now been downplayed.

Barretto and her husband, actor Raymart Santiago, on Friday denied they have separated – contrary to public perception following an incident on October 25  in which Barretto was seen losing her composure in a bank after being told that the money she was about to withdraw had been moved by another party.

In a joint statement sent to the Philippine Daily Inquirer, the show biz couple said: “We are still together. We have not separated. We love each other and we both value and cherish our marriage and relationship. Any issues that we may have are private and do not detract from, nor diminish, the strength of our marriage.”
The statement avoided any mention of the bank incident.

According to a TV report aired on GMA 7’s news program “24 Oras,” Barretto went to a bank on Quezon Avenue, Quezon City, at noon on October 25 with her lawyer Agnes Maranan to withdraw an undisclosed amount of money. Over half an hour later, they discovered that the money was no longer available and was taken through an inter-branch withdrawal.

It was not clear why Barretto was accompanied by a lawyer, although an entertainment columnist, quoting unidentified sources, said that the actress sensed something wrong upon getting home from a TV taping session and finding her husband and all of his vehicles gone. She immediately contacted her lawyer and rushed to the bank to withdraw P5 million.

The presence of a TV news crew led by “24 Oras” show biz reporter Nelson Canlas also raised speculations. Asked what he was doing there at the same time that Barretto was breaking down, Canlas told the Inquirer that it was Barretto herself who called him up and told him to proceed to the bank, which is near the GMA 7 studios.

The TV camera captured Barretto in a foul mood inside the bank. When she came out, she tearfully told the news crew to ask her lawyer about what happened.

Maranan questioned the timing of the money’s withdrawal by another party – presumably Santiago. “It was withdrawn at the time we were asking to withdraw it,” the lawyer said. “We were here for more than 30 minutes. I was able to confirm from the teller that the funds were still there; and then suddenly, about 30 minutes later, wala na ’yung funds [the funds were gone].”

The money was supposed to come from Barretto and Santiago’s joint bank account, from which either spouse could withdraw separately.

Maranan, on the same TV program, said there had been a bank transaction at 12:45 p.m. “This moved the fund, but I was not told kung saan na-move.” It’s still unclear whether Barretto would be able to get the money back.

The couple’s joint statement, sent to the Inquirer by Barretto’s manager Shirley Kuan, said: “In recent days, there have been numerous negative rumors about our marriage and our relationship, all of which have caused us, our children, and our families undue stress, strain, and unnecessary tension. We ask that the public allow us to deal with our minor concerns without the glare and glee of media speculation that only hurt us and those we love.”

The couple added that they were “deeply committed to our two children (Sabina, 7, Santino, 4), whom we love unconditionally. As concerned and devoted parents, we shall zealously protect their privacy, and their right to be untouched by malice and gossip.”

The Santiagos then pleaded with the public to respect the rights of their children, who are “innocent… unjustly harmed by the baseless gossip about us.” They added that they hope the joint statement would settle and lay to rest “all questions about us as a couple, and as individuals.”

Barretto has been at the center of controversies of late. She was rumored to have had an extra-marital affair with a friend of her husband’s, Martin Castro. She denied this and accused actress Angelica Panganiban of maliciously spreading lies about her.

Barretto was also romantically linked with businessman Atong Ang, whom she said she knew only  through one of her sisters-in-law. She added that Ang, being Castro’s godfather, volunteered to help them solve her marital misunderstanding.

The actress was also rumored to have had a romantic relationship with Senator Jose “Jinggoy” Estrada. Barretto, however, swore she wasn’t close to the actor-politician and just happened to attend a party he hosted with some of her friends.